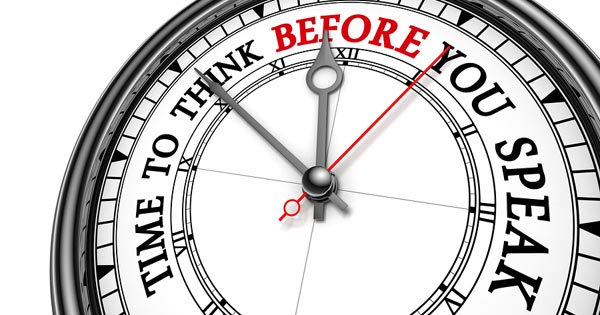 In this article you’ll discover:

Have you ever been accused of having ‘foot in your mouth’ disease?

Yes, it’s a bit pf a pun on the outbreak of ‘foot and mouth’ disease that ravaged animal agriculture in England at the beginning of this century. And it was no laughing matter.

Thankfully, unlike the real disease, the ‘foot in your mouth’ made-up disease isn’t contagious!

If you’re unfamiliar with the term, it’s when you say something so inappropriate, the instant they leave your mouth you wish you could take them back immediately, or even better have “kept your darn mouth shut.”

In other instances, it can be something you said in all earnest you believed but because of the words, or vehicle you used to deliver those words, it had an unintended consequence which you ended up regretting and wished you could recant – like please ignore or press delete before it reaches your ears!

We all like spontaneity in our lives and its unrealistic to think we’ll never say something that we’re embarrassed about later, but if this is a frequent occurrence for you then it can have a lasting impact on what people think of you and your relationships.

Let’s explore this more and then how we can avoid this “foot in mouth” disease.

DID YOU REALLY MEAN TO SAY THAT? 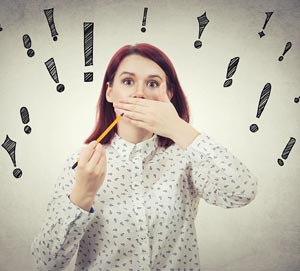 Often times, people are so caught up in the moment, namely their emotions, they speak without thinking or just utter whatever comes into their thoughts without any filtering. Unfortunately, once something is spoken, it can’t be taken back.

Of course, now with all the instant communications we have at our disposal such as messaging, twitter, email, etc. we can offer our unfiltered opinions without a second thought. This happens way too many times with people posting rants and opinions on social media without any care for an ounce of decorum or protocol, or feelings of others.

Relationships and friendships often end over trivial misspoken words that cannot be unsaid.

We have a current climate of discussing important issues in full frontal view of the world and the less than stellar thinking, before saying, on topics and opinions such as women abuse in the entertainment world, and a current president that tweets his every thought not that he’s the only one doing this.

How many times have apologies been issued because the person realized what they said was an emotional outburst and not the right thing to say.

There is a great saying about communication, ‘Words do not mean, rather people do’!

Words are just words, they have in themselves no meaning or power. The person speaking gives the word meaning and power because of their intention or use of the word. Moreover, it’s the motivation for saying what you’re saying, how you say it, and why you say it that gives the feeling behind the words spoken!

Sometimes people say things because they believe it’s the right thing to say, or they’re justified in saying it in the moment, but it may do more harm than good if the receiver of the message is not ready or able to accept what is being said to them.

Furthermore, sometimes people say things sarcastically, or use it for humor but those listening perceive the message differently and are taken aback by what was said.

With social media; Facebook, Twitter, Instagram, and Messenger etc., the problem is people are posting messages quickly, randomly and while at work or functions (under stressful situations), and they’re either not getting the proper intended message out, or putting too much out there and end up insulting others.

The problem with using email and social media to deliver your message is you lose the feeling or the non-verbal signs often associated with a face-to-face discussion. The person receiving the message cannot read your message in the context of your body language or facial expression.

Texting, online social media, etc., has the danger to make you come off as sounding rude, ignorant, uncaring or callous when all along you never intended it to be so.

You may be putting your “foot in your mouth” and not even aware you’re doing it!

Since texting is so new and all age groups are using it and it encourages the sharing of instant and in the moment thoughts, it undermines effective communication plus there are no real ‘set’ protocols in place for how to ‘text’ or ‘Tweet’ messages properly.

For more about controlling your texting and those of your kids check out the article we wrote about this at the link posted below in the resource section.

This article isn’t about effective communication as there are plenty of smarter and more qualified folks than I to help you in that department. But there are some simple things you can do to help you overcome “foot in mouth” disease. 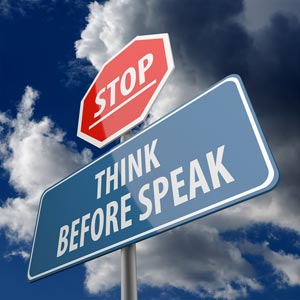 One of the keys to not putting your foot in your mouth is to think before you speak. The other one is to think of the medium you’re going to use to deliver the message before pushing that “submit” button.

It all comes down to, as one article I read on the topic said, pushing your “mental pause button.”

In the days of writing letters to people we had time to think about the words and chose them carefully. There wasn’t the stress to get our remarks out there quickly or give our opinion or advice fast. While certainly, you could still say the wrong things in letters going snail mail we were as a society less likely to fall into the instant opinion quotes.

There is still a place for letters. Letters are personal and in themselves say more about you and your thoughts and convey caring about the delivered message and how it will be interpreted. In difficult times and when delivering a hard message, it can still be the most appropriate medium to use.

There is also the wait 24-hours method.

When you feel emotionally charged about responding in a negative manner then wait 24-hours and see how you feel about it in the “clear light of day.”

Sometimes we feel differently about a topic by sleeping on it, or learn something new soon after that puts things in a totally different perspective. The wait may not alter your opinion but it could change the words you choose to respond to somebody or some topic.

So, there’s nothing wrong with using email. But it should be composed in the same thoughtful manner as you would when writing a letter to somebody. It’s not a substitute for a face-to-face chat about a difficult subject or a way to argue about a topic.

My rule is if it takes more than 2 emails to offer or explain information, or a perspective about a topic, then a different medium should be used. Never try and argue over email – it’s a poor medium for this. I also put forum responses in same category, and even more so, because forum responses are there for the world to see… in many cases for ever!

Seriously, difficult or complicated information messages warrant picking up the phone and calling an individual. While you could still say something on the phone you regret later the fact is, because of the medium, the discussion is usually more deliberate and less impulsive.

So, providing you approach the call in a positive manner you lessen the chance of being misunderstood or blurting out something without engaging your brain first!

5. Up Close and Personal:

Face-to-face remains the best way of hearing and understanding the spoken word. It’s not always possible I know but it’s the best filter and to understand the context of what is said and how it’s said. Body language and facial expressions communicate so much – yes, there is a nice way using expressions to say something difficult.

It still requires a filter for sure. But misunderstandings can be cleared up quickly or clarification on what was said and why. You get a chance to review the reaction and pick up on the impact of what you said immediately and correct even if once uttered it’s out there.

If you’re an individual who sounds off first then thinks later, consider hypnosis.

If you’re guilty of often being misunderstood or over-reacting, then hypnosis can help by putting you in a frame of mind to hesitate and take time before speaking your mind! It can automate your “mental pause button.”

A qualified hypnotist can implant in your unconscious mind post-hypnotic suggestions which will help deter you to act and speak before engaging brain! Most hypnotherapists will be able to help but if one is not local to you then there are resources available to achieve the same result through self-hypnosis.

For more suggestions on thinking before reacting, and speaking before you think, check out the links for further reading in the resource section below. If you want to consider working directly with me through my online and in-office sessions then check out my Special Hypnosis Services here.

Each of these simple ways can help in different circumstances. So, no one way is the best in all situations. But at least you know now you don’t have to be stuck with the “foot in mouth” disease. If you do, then you made a choice to be trapped in that bad spot.

Foot-in-Mouth disease happens when you’re inclined to speak before you think and regret it almost immediately, wishing to take the words back or be able to make amends in another way. Unfortunately, once you’ve spoken the damage is done and remorse sets in and a desire to avoid repeating the same mistake in the future.

Our use of technology and desire to offer an opinion to an individual, or group, fast these days, overtakes our sense of empathy with others leading to a poor choice of words and how we say it. Words in themselves do not having meaning or hurt, it’s us who give power to words.

However, there are ways to overcome this tendency pf putting your foot-in-mouth before engaging your brain, and if it’s a common trait in you then this article discusses 6 simple ways to help with avoiding this “disease.”

One of these ways is hypnosis, as it can help you train your brain to pick up on and respond to your environment so that you can communicate naturally yet appropriately. Check out this hypnosis session to see if it can help you here >>>

ADDITIONAL RESOURCES RELATED TO THINK BEFORE YOU SPEAK: