Overcoming Being a Picky Eater 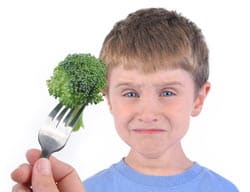 Are you still stuck in this mindset with many foods?

Are you an individual who is worse than a calorie counter in that they are so picky about what they eat that it actually makes others around you uncomfortable, possibly even yourself?

Some people are known to go into nice restaurants featuring abundant menus which could feed a third world country, but they can never decide what to order. In fact, some won’t order anything at all, as nothing on the entire menu appeals to them.

The question most others ask at this point is, “What do these folks actually eat?”

The old adage from childhood that parents often chastised kids on is, “You’ll eat when you are good and ready!” What happens now that they are adults and they are still not “good and ready“?

Where did this being an excessive picky eater mindset come from? Most likely it was a by-product of conditioning and reinforcement. A couple of different scenarios may have led to it.

First off, as a child, whenever you did not want to eat something, or finish something, you were given a free pass. You might have said, “Yuck, I won’t eat it!”, and then were rewarded with getting something better to eat that you wanted.

Second, you might have experienced one aversion after another when it came to meals that eventually too many or most grossed you out.

Even if the meal was “good“, you were always waiting for the other shoe to drop, expecting there to be something wrong with it.

Overall, both of these experiences basically put you in a power mindset mode whereby the only way you would eat at all was to either prepare your own meals, or have someone make something you know you would like. Interesting, when it comes to restaurants, it is not uncommon for someone to be a regular customer because a cook prepares a meal a certain way how they like it and when that cook isn’t preparing it, the picky eater recognizes instantly that someone else prepared the meal!

Picky eating is a mindset so to speak… one has set their mind on eating only what they want to eat, even if it is good for them but won’t try it, or even if it offends other people who are in their company.

So what can be done to overcome this unbecoming aversion to all foods not being on one’s mental menu?

It is all about shifting one’s perception.

Ideally one starts to perceive food as healthy, delicious and nutritious, rather than a burden or something to be avoided at all costs. One’s mind needs to become reconditioned in that they will embrace the opportunity to try both new and old foods they have shunned.

This can be accomplished through hypnosis if they are truly serious about being more open-minded to eating. Post-hypnotic suggestions are put in the mind that when they encounter opportunities to try foods they would have otherwise shunned, they are excited to try. We’ve helped people in the past expand their limited food choices and include healthy diets before so hypnosis can help. If you want to discuss working directly with us on your particular issue to see if we can help and advise you on a next step, then check out our Hypnosis Services or you can contact us here.

It really does work and results can be seen in as little as one session!

Alternatively, if you prefer a self-hypnosis product and are ready to stop being a picky eater and enjoy a wide variety of delicious foods then check out this session here >>>

ADDITIONAL RESOURCES RELATED TO BEING A PICKY EATER:

Helping and Encouraging Your Kids to Eat Healthy >>>