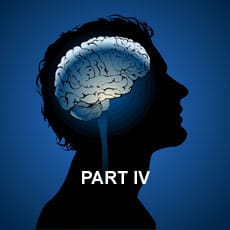 This is Part IV of a six-part series on the topic of Mind Body Connection.

Have you ever wondered if the mind body connection really works? If so, then how does it work and how can one influence it?

There is a famous saying, “What goes up must come down.” Perhaps the same line of logic can be held for the mind, “What goes in must come out.” And what we are talking about going in are thoughts - action potential.

And just think…your thoughts are that fast! So, what does this mean?

Well, it means what you are thinking about at any given time has the propensity and energy to affect your mind and body. First the mind is triggered by thoughts and these thoughts are channeled into the body! In turn, the body acts out what the mind tells it too.

In the mind body connection when discussing thoughts, it is important to note that not all thoughts are carried out consciously. Many of us actually think and do things unconsciously - not using our critical sensors to control what we are thinking and doing.

A lot of our thinking is done on autopilot.

Is it any wonder that many of our actions are also done through an autopilot mindset? Often times, the body is responding to unconscious demands placed on it in turn responding unconsciously. Hence, action-wise, many of us are “creatures of habit”. This judgment is based on our actions.

Instead, the politically correct term in the arena of the mind body connection should be creatures of thought!

If you are a smoker, or have ever tried it, then you will understand this process better than a non-smoker.

Whenever you tried smoking in the beginning, you had to pay full attention to what you were doing. The mind body connection was consciously connected and needed to be as precise as possible to avoid getting burned.

The smoker would put the cigarette in their mouth and take proper care in lighting it so not to burn their fingers or their lips. The guiding of the lighter or match to the cigarette was done carefully. Eyes were focused on the task at hand. Now as the smoker became more proficient in their habit which potentially led to their smoking addiction, the lighting of the cigarette became second hand - no pun intended in terms of smoke!

What happened was the body acted so many times at the command of the mind to light the cigarette that the process became habitual and mundane leading to an unconscious habit.

Many smokers are very talented at lighting a cigarette while operating a motor vehicle, working on a project, or when they are in the dark and they don’t burn themselves.

The mind body connection has become ingrained in their unconscious as if it has become a part of them…which for all intents and purposes it has. Furthermore, most smokers tend to light up when they are stressed or as a part of a ritual before, during or after a specific activity. Interestingly, these “lighting up periods” are often done unconsciously out of a mere robotic response.

If you smoke or know someone who smokes, you’ll notice that by habit whenever anything stressful happens they reach for their smokes!

Conversely, learning to type on a keyboard is a more positive talent which operates very much on the same premise as the individual smoking. The same mind body connection process is at work.

Whenever someone learns to type or use a computer keyboard, they have to look down at the keys and usually use their pointers. The depressing of the keys is usually slow, very intentional and monotonous. Now over a period of time, the fingers which are receiving signals from the brain which in turn are being commanded by the mind, start to respond by typing in a second hand manner much the same was as the smoker lighting up.

Typing becomes more proficient, faster, as more fingers are used in the process and most people no longer have to look down at the keyboard. As a matter of fact, some are able to type almost as fast as they are able to talk.

The energy transmitted from the mind to body needed for typing becomes superfast for some. And if there is a greater vested interest in being a very proficient typist, then the mind will expound more energy to make sure the individuals becomes a talented typist.

Since most of us today chat on the Internet and cell phones, is it any wonder most people are becoming extremely proficient and talented typists?

In both situations, the mind body connection has worked in a process which started out as conscious (goal directed and intended) to one which becomes unconscious (a skill achieved through repetition). The body is like a robot which does whatever the mind tells it to do.

The key element for mind body connection success is motivation.

On the other hand, extrinsic motivation requires the individual to derive some kind of reward from the experience or at least some recognition.

Most people avoid change like the plague because it requires commitment, energy and of course motivation.

Did you know that when most people are willing to change it is due to some outside force? They want to lose weight because they look fat. They want to quit smoking because they have breathing problems. They want to take anger management courses because they are abusing their spouse or their child and worry they will lose their family. They change because of something they see about themselves or because someone points it out to them.

Conversely, those who recognize the need for change within do so because they are motivated to take control of their lives. Basically, they try to master their own mind body connection!

Most people live in the perceptual world of “seeing is believing!” Hence they need to first see the problem before they will admit a problem exists.

Furthermore, when the problem does exist and they see it, many choose to ignore it hoping it will go away. They do not understand that they are the masters of their own domains so to speak. The true masters operate on the premise that, “believing is seeing.”

They believe they possess a great degree of control over their own lives. They recognize that what they think influences how they feel which in turn perpetuate how they act and what they become. They know that “thoughts become things!” Positive thoughts have the ability to create health and happiness, whereas anxious and fearful thoughts are more likely to perpetuate disease.

One of the greatest examples of the mind body connection in action is phobias.

A phobia is an irrational fear to a specific object or situation. Most phobias happen out of experiencing or witnessing a negative experience. Furthermore, when the situation does occur, it is usually a one time thing which people invest a lot of their thoughts and emotion into

What’s even more interesting, most phobias occur by proxy - the individual becomes afraid of something by learning it from their parents/loved one or watching it on TV.

One of the greatest phobias most people possess is a fear of snakes. When one’s mind comprehends the image of a snake, many becomes nervous, shaky, sweaty, nauseated and feel like passing out. They begin to take on the attributes of having a panic attack. The mind pushes a button which says “danger” and the body acts accordingly.

Now let’s take a few for instances into account.

First, how many people have actually been attacked by a snake in their life? Second, if snakes did attack, which some do, what are the chances of being attacked by a wild, poisonous snake where you live…say next to 1 in a trillion? And third, where did this intense fear come from and why was it never challenged?

Remember in the mind body connection…Thoughts Become Things! In this case, a negative thought or experience which went unchallenged became a phobia. The mind did not censor itself and allowed an irrational fear to threaten its consciousness, unconsciousness and its body!

In the mind body connection did you know that most phobias like the example of the snake are unfounded and perpetuated unconsciously?

The individual does not challenge their fears or scrutinize them and differently than learning to smoke or typing on a key board. These thoughts become second nature as they are stored in the brain in an irrational fear file which eventually gets opened and the body creates “dis-eased” physical responses.

By challenging and reshaping thoughts, new cognitive scripts and neural pathways are created within the brain - mind acting on body. One of the surest and fastest methods for accomplishing these changes is through hypnosis. Hypnosis is the fastest way into the unconsciousness and it works to change immediately or gradually the irrational file of information stored in the mind/brain.

When referring to the abilities to master thoughts in the mind body connection - to change the ability to control your life, you are basically using self-hypnosis.

Self-hypnosis is a controlled and guided tunnel vision which helps you stay the course for your thinking. Since we mostly think on autopilot, we become lazy thinkers who do not monitor our thoughts as we should. This gives rise to the bad habits, addictions and phobias which cause us anxiety, depression, fear and illness.

Hypnosis is an amazing tool which empowers the individual to take control of what they think they have no control over, or have surrendered to their unconscious thought process.

When discussing the mind body connection, hypnosis is perhaps the most effective and easiest way to manifest the things you want to happen from your thoughts!

Here at Free At Last Hypnosis we recognize and understand the mind body connection is real. We see the strong connection in evidence almost every day with our clients we help with our stress and anxiety management service or confidence and self-esteem program. So learn more about the connection in the articles below as we get into more detail.

OTHER MIND BODY CONNECTION RESOURCES IN THIS SERIES:

Part VI of series Mind Body Connection - Putting it All Together here.